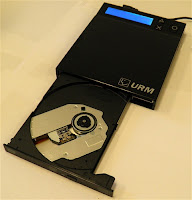 This January, Samsung revealed its new 3D Blu-ray Disc home theater system.  The home theater system also allows users to convert their DVDs and  Blu-ray Disc movies into digital copies with the Blu-ray player’s “Disc to Digital” feature.  Users will be able to register their ownership of the movies then they can watch the movies anywhere, from different rooms in their house to their phone.

On the contrary, U-Reach’s uDisc provides a flash to disc conversion.

uDisc Part 1: Backing up Photos from your SD card to a Disc