After witnessing U-Reach's new HDD Terminator HDT1, some people asked about a "less violent" solution; particularly for those who plan to reuse the hard drives after they get sanitized. Luckily, along the line of duplication equipment, Legend 600 serves not only as cloner, but also as eraser for hard disk and solid state drives.

Available in 3-target model currently, this standalone Legend 600 copies and erases up to three drives at a time. When thirty units are linked together through a daisy chain, a total of 119 drives can be simultaneously dealt with, while performance remains the same whether it is one target or a full load.

At 3.9 GB/min, it takes about 4 hours to clone or erase a 1 TB drive completely. If DoD (Department of Defense) erase is in order, it will be three times as long as there will be three cycles of overwriting.  When used as a cloner, Legend 600 can intelligently copy only the data portion of a master drive provided it has been formatted under FAT, NTFS or Linux ext; otherwise, it can be file system agnostic to duplicate the whole drive bit-for-bit.

As far as interface goes, Legend 600 offers standard SATA connectors onboard to hook up HDDs/SSDs directly.  For drives with interfaces such as IDE, mSATA, micro SATA, eSATA and iVDR, corresponding SATA adapters can be used to facilitate connections.  Even SD and CF cards can be supported in this fashion.

Retailed at $799, Legend 600 is a cost-effective choice when it comes down to HDD/SSD cloning and data sanitization.

Posted by U-Reach Data Solutions Inc. at 4:21 PM No comments: 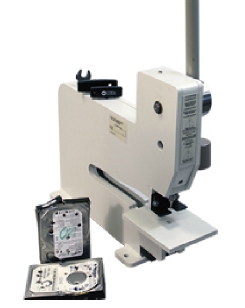